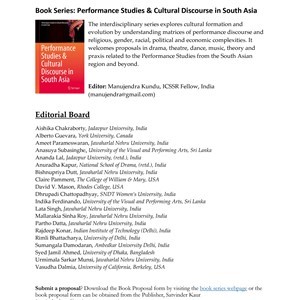 Greetings, All! This is an invitation to submit book proposals. Feel free to write at manujendra@gmail.com

Drama, theatre, dance, and music are influenced by social-political-economic issues and, in turn, they also influence and construct the cultural discourse. These forms of entertainment involve public and personal spaces, emotional and political questions at the same time. The series is intended to address these concerns by creating a space for critical engagement through scholarly studies and edited volumes. The objective is to explore the cultural formation and evolution through an understanding of matrices of performance discourse and religious, gender, racial, political and economic complexities. Keeping these aims in mind, the series would draw the most advanced and pioneering works on the established and developing areas to attract not just seasoned academics but also general readers.