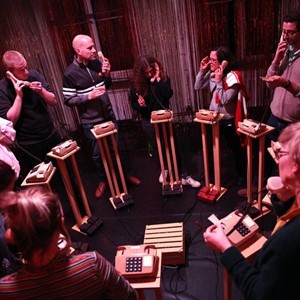 To better understand new performances that are marked by video games, it would appear beneficial for theatrical research to draw upon game studies. Phot. "Disaster", conception: machina Ex©.

Since the early 2000s, video games have become the economically dominant medium and their cultural importance has been growing ever since. It is, therefore, logical that an increasing number of creators of live performances are interested in video games. The influence of the latter can be viewed both thematically and formally (or scenographically), with various intermedia configurations (Muehlhausen 2014). The opposite phenomenon can also be observed: video games generally draw on pre-existing media and are sometimes inspired by live performance.

To better understand new performances that are marked by video games, it would appear beneficial for theatrical research to draw upon game studies. Conversely, video games are increasingly observed from the perspective of their performative dimension (Jayemanne 2019). Narrative strategies, immersion, interaction, identification, multimodality, characters and the relationship between physical and virtual worlds: the fields of investigation concerning the complex relationship between live performance and video games are numerous and compound (Nicholson and Harpin 2017). This symposium will bring together specialists in the field and will provide an overview of research into this relationship. These events will also constitute an opportunity to extend certain previously proposed analyses.

While intermedia theatre, in general, is the subject of a considerable amount of research and the various forms of participatory theatre, such as immersive theatre have also been the subject of several publications, the relationship between live performance and video games is still rarely studied and relatively few research papers dedicated to these issues exist (Biggin 2017, Dreifuss 2017, Männel 2018, Büscher 2018). Indeed, even if the portal nachtkritik.de has established the category, "Game Theater", in its lexicon, where journalist Christian Rakow writes on the topic since 2012,  and although several doctoral theses have been completed or are in progress in relation to this theme (Foster 2017, Dreifuss, Männel), there is a limited number of articles that relate to this topic. It should be noted that two international colloquia were held at the Zürcher Hochschule der Künste (ZHdK), in 2016, "Gamification: Digitale Ausrahmungen des Theaters" and in 2018 "Ludification im Theater. Neue Utopien des Theatralen", both organized by Dieter Mersch and Réjane Dreifuss.

The aim is to understand how companies such as Machina eX transpose the structures of certain video games to the theatre, how the hybrid and multimodal performances of groups of artists, such as the emblematic Blast Theory, can be understood in the context of gamification in both the physical and virtual space. Several modes of appropriation have now been established: for example, the group, Vortex LLC, takes its inspiration from Body-Tracked Multiplayer Gaming and Yan Duyvendak from gaming protocols, by working with the public in an open space (Virus). Collectives, such as Rimini Protokoll or companies, such as Extraleben, use video games in the stage space. Video games are not only used in the theatre, but also, for example, in Matthieu Epp's storytelling performances or in hybrid forms, which combine the stage space with an immersive installation, such as the emerging group, rgb's Brainwaves project. It is also interesting to consider theatrical practices that play on immersion and induce a phenomenon of proprioception: they are developed by artists collaborating with neuroscientists, notably Éric Joris and CREW, Andrew Dawson and Aaron Reeves.

From an inverted perspective, we will see how video games are influenced by the performing arts and how the notion of performativity can contribute to a better understanding of games (Homan 2014 and 2017). As a form of narrative representation, video games arguably include a multitude of intermedia references to film or literature. As a form of playful experience, video games also share many common aspects with board games, but also with theatre, in terms of different dimensions of play, participation and stage interaction (Kolesch, Schütz and Nikoleit 2019). We will examine in more detail to what extent intermedia references to live performances play a role in video games. We will also look at the creation of video games by live performance artists, such as the Austrian collective, Gold Extra.

It is now widely accepted that game studies are a highly interdisciplinary field and that different approaches are needed to understand all their dimensions. Connections between video games and theatre have existed at least since Brenda Laurel's seminal publication, Computers as Theatre, which highlighted analogies between the two forms, particularly in terms of their potential for representation and interaction. Gonzalo Frasca, in his work of the early 2000s, brought video games closer to Augusto Boal's Theatre of the Oppressed, questioning their potential as a space for active and critical participation by players (Frasca 2001). Subsequently, various articles have sought to establish links between video games and performativity (Ackermann 2014, Neitzel 2018, Leichter 2019, Huuhka 2020, Levet 2021).

One of the main questions is to what extent video games go beyond mere representation and can be viewed as a performative act, not only when played in front of an audience at e-sports events or during broadcasts on Twitch, but also at the level of the game itself. In this context, it will be necessary to understand how video games can develop discourses beyond representation ("procedural rhetoric", Bogost 2008) and how the players who participate, should be considered ("expressive potential", Genvo 2012). Central to the analyses are often questions relating to the position of gamers and their participation, be it immersion, involvement or incorporation (Calleja 2011) or even a dual status as a performer and spectator (Neitzel 2018). These and other questions will be explored during the symposium, in order to gain a better understanding of contemporary live performance and video games, and their multiple relationships.

Some of the topics to consider include but are not limited to:

Submission should include an abstract and a short biography. Material should be prepared in English. Submissions should be about one page long and they should be sent to Réjane Dreifuss (rejane.dreifuss@zhdk.ch), Simon Hagemann (simon.hagemann@univ-lorraine.fr) and Izabella Pluta (izabella.pluta@unil.ch) before June 15th, 2022. The symposium will be held in English in online mode.

is a research associate at the Institute for Media and Cultural Studies. She is currently preparing the publication of her habilitation thesis Studies on Games. Her latest publication is Filmische Moderne. 60 Fragmente (ed. together with Oliver Fahle, Lisa Gotto, Lars Nowak, Hedwig Wagner, André Wendler and Daniela Wentz) Bielefeld: transcript 2019.

is Professor of English and faculty member in the Graduate Program in Literature and Criticism. He is interested in playful literature, especially in  interdisciplinary approaches to videogames, board games, and tabletop roleplaying games. He is fascinated by how games and players tell stories and communicate and complicate values. His latest book is Systemic Dramaturgy: A Handbook for the Digital Age (Southern Illinois University Press, 2020) with co-author, Michael M. Chemers.

Andy Lavender (Vice Principal and Director of Production Arts, and Professor of Theatre & Performance at Guildhall School of Music & Drama)

--Foster, Greg: Towards a Theatre for Gamers: A new paradigm of practice in contemporary live performance as a response to games and interactivity in digital media and performance culture, Thesis, University of Salford, 2017.

--Frasca, Gonzalo, Videogames of the oppressed Videogames as a means for critical thinking and debate. MA. Thesis, Atlata Georgia Institute of Technology, 2001.