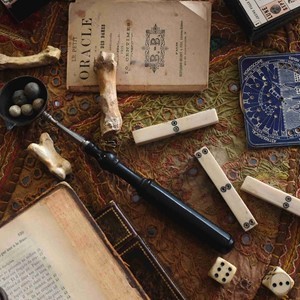 For the Objets Chargés/Charged Objects symposium on 20 and 21 April 2023 in Antwerp, we invite paper proposals that address the performance of charged objects in different venues and situations.

Performance and media histories are littered with objects: props, posters, postcards, newspaper clippings, costumes, slides, (remains of) technologies, etc. They are pieces of the puzzle we compose every time we try to reconstruct and understand a live event from the past.

However, by the obscure life that is theirs, by their “auratic” power, some objects do not appear as inert human possessions but instead as “actants”, with specific features, energies, and potentials. We call them objets chargés. The charged object imposes its singularity. It is charged because it exceeds its mere instrumentalisation or mere utilisation. In its most paradigmatic form it appears as magical, sacred, supernatural or ritual, as it signals towards a radical elsewhere. It has the power to pull the spectator out of the secular world. It seems to transport its own context – archaeology, archives, ethnology, folklore, fiction – with it, at least for the connoisseur viewer. Traces of elsewhere, proof of the existence of latent forces, condensers of the imaginary, and charged objects summon a world.And, yet, the object lives through the efforts of its mediators who breathe life into it by establishing a link with the spectator: shamans, priests, directors, demonstrators, curators, collectors, antique dealers, auctioneers, archaeologists. Thus, we propose to study this exchange relying upon the dispositive of performer - object - spectator.

And, yet, the object lives through the efforts of its mediators who breathe life into it by establishing a link with the spectator: shamans, priests, directors, demonstrators, curators, collectors, antique dealers, auctioneers, archaeologists. Thus, we propose to study this exchange relying upon the dispositive of performer - object - spectator.

When, where, and how does an object of this type take on a theatrical life and become performative? How does the agency of the object, alongside its aesthetics, manifest itself? What is the impact on performance or staging of this switch from passive object to “actant”? These questions prompt us to think outside of methodologies in theatre and performance studies that feature solely human agents of artistic practice and scholarship.

We invite papers that address the performance of charged objects in different types of venues and situations, such as exhibition and performance practices and sites; like the fairground, its sideshows and spectacular events, the museum and its natural history displays, wax works, cabinets of curiosities, theatrical performance as an avenue to occult and mystical communication, and magic shows and fantastic illusionism. The focus is on performative objects in the long nineteenth and early twentieth centuries and their afterlife in contemporary practices. We will consider 'paradigmatic' charged objects in a performance context (eccentric, spectacular, magical, sacred, supernatural, etc.), beyond the individual affective link. We invite contributors to highlight the ways in which charged objects are presented and staged, creating live connections between performer and spectator.

Scholars working within and in between different areas of inquiry, including, but not limited to performance and media studies, visual arts, anthropology, cultural history, art history and theory, history of knowledge and technology are welcome to submit a 300 word abstract in English or French together with a short bio-bibliography (max. 200 words) to Thibaut Rioult at the following address: Thibaut.Rioult@uantwerpen.be by 15/01/2023. Authors of accepted papers will be notified by 31/01/2023.

Papers will also be selected for inclusion in an edited volume in the series Media Performance Histories (Brepols). If you do not want to participate in the publication process, please mention this in your abstract.