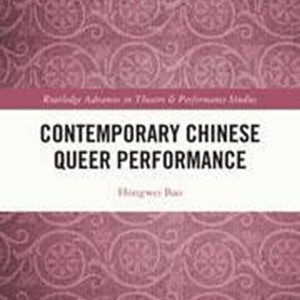 This book documents various forms of queer performance – including music, film, theatre, and political activism – in the first two decades of the twenty first century.

I am delighted to announce the publication of my new book Contemporary Chinese Queer Performance.

Thank you and all the best,

This book documents various forms of queer performance – including music, film, theatre, and political activism – in the first two decades of the twenty first century. In doing so, Bao argues for the importance of performance for queer identity and community formation. This trailblazing work uses queer performance as an analytical lens to challenge heteronormative modes of social relations and hegemonic narratives of historiography.

It will be of great interest to students and scholars of theatre and performance studies, gender and sexuality studies and Asian studies.

Dr Hongwei Bao is Associate Professor in Media Studies at the University of Nottingham, UK, where he directs the Centre for Contemporary East Asian Cultural Studies. He holds a PhD in Gender and Cultural Studies from the University of Sydney, Australia. He is the author of four research monographs on queer Chinese history and culture: Queer Comrades, Queer China, Queer Media in China and Contemporary Chinese Queer Performance. Dr Bao is the co-editor of Routledge Handbook for Chinese Gender and Sexuality, the Bloomsbury book series Queering China: Transnational; Genders and Sexualities, and the de Gruyter book series Oyster: Feminist and Queer Approaches to Arts, Cultures and Genders. He also serves on the editorial boards of British Journal of Chinese Studies, Chinese Independent Cinema Observer, Journal of Contemporary Chinese Art, the Political Cinemas book series (Edinburgh University Press) and the Queer Asia book series (Hong Kong University Press). He writes and edits a column called ‘Queer Lens’ for the Chinese Independent Film Archive.