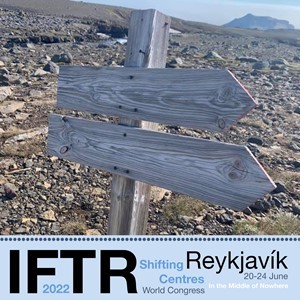 Shifting Centres (In the Middle of Nowhere)

Images of centre and periphery in academic discourse are complex and contested. The notion of centre invokes a point of reference, a fixed location that defines surrounding positions and movements, a hierarchical field or structure. Despite poststructuralist attempts at decentralization in various fields, inspired by Derrida’s claim that the centre is elsewhere – the centre is not the centre –, concepts of centre(s) remain important (central?) topics of discussion in the humanities. Such images haunt theatre studies in multiple ways: in the relationships and tensions between the local and the global, between the urban theatre hub and the rural periphery; in the centrality of the nation state in national theatre histories, challenged by notions of global and transnational currents; in approaches to post- and decolonial studies; in the privileged position of avant-garde and experimental theatre over popular entertainment, of professionalism over amateurism. Furthermore, centres are constantly challenged by new methods and viewpoints: practice-based research has challenged traditional academic methods of seeking knowledge, shifting the centre of knowledge from the archive and the lecture hall to the rehearsal space; shifts and turns in academic discourse challenge ruling paradigms. Images of the centre are constantly being challenged, redefined and relocated. In addition, the lockdowns and closures of theatres across the world due to the recent pandemic have brought new realities of audiences being physically unable to attend performance venues, causing artists and theatres to increasingly venture into the less charted waters of the cyberworld through live streaming and virtual performances, thus relocating traditional places of performance.

The University of Iceland and the Iceland University of the Arts propose an opportunity to discuss and examine, discuss and challenge notions of the centre at an IFTR conference dedicated to the theme Shifting Centres. Situated on the margins of Europe, short of the polar circle, Iceland provides IFTR with an opportunity to shift perspectives and rethink concepts and images of centre and periphery. A common stop-over location from the early decades of aviation travel between North America and Europe, Iceland has historically placed itself in the middle, which draws attention to the question: in the middle of what? As a point of connection between two continents, this notion of Iceland’s location ‘in the middle’ not only reveals its entanglement in the construct of ‘the West’ as well as ‘the Global North’ as a global centre of attention but also discloses its inherent paradoxes when a geographically marginal place pushes itself to the centre.

Throughout Icelandic history, well into the mid-twentieth century, the gateway to the outer world were the Scandinavian countries, particularly the Danish capital of Copenhagen, which in turn are commonly considered as peripheral to the image of the centre in ‘Europe’. As Dipesh Chakrabarty has pointed out in his seminal analysis on postcolonial thought and historical difference in the relation between Europe and India, ‘Europe’ is a hyperreal term, a mythical figure, referring to ‘certain figures of imagination whose geographical referent remains somewhat indeterminate’. The reference point of the centre is uncertain and fluid, depending largely on the point of view of the onlooker, situated somewhere on the outside, constantly forced to refer and relate to the centre.

Keeping that in mind, the popular image of the cultural centre is a complex construct. Cities may have asserted themselves as cultural capitals – or, in the context of theatre, as theatre metropoles – where ‘culture’ has become a key attraction and an important factor in the image, marketing strategies and economy of the city, but at the same time the branding of a city as a culture or theatre metropole tends to privilege certain legitimized or homogenous forms of culture, while disregarding the variety of cultures – high and low – that exist on the margins or below the main currents. Furthermore, among the inhabitants of cultural metropoles, one is bound to find a ‘human tapestry’ from around the globe, which questions any image of a homogenous culture of the city. This constantly contested image of cultural tapestry may of course be seen as a product of globalisation, which in turn must be considered a dominant power construct of the West or Global North, opening up for contemplation about images of centralized cities and institutions outside of Europe and North-America.  Additionally, shifting the focus from the cultural metropole draws attention to the non-city, to the rural, the provincial and the locally specific.

In relation to performance and performance studies the centre is also interesting to look at from the standpoint of the route of influence, methods and study. If the image of a ‘hub’ of artistic and intellectual progressiveness is revealed as a city of diverse demography and a multitude of cultural currents, questions may be raised of the authenticity of the ‘national’ culture such cultural capitals tend to emphasise and privilege. The ‘centre’ may be seen as a point of exchange, rather than as a point of origin, a site of interconnectedness or interweaving, where the margins meet and interact. The position of the academic centre, individual fields of study and research may also be seen as points of exchange, rather than disciplinary silos, where an exchange with other disciplines provide connections and create new pathways of study.

The University of Iceland and the Iceland University of the Arts invite you to engage in a critique of the complex and varied relationships between centre and periphery; a critique that demands an approach from a variety of standpoints – in effect a shifting of centres. Shifting centres not only refers to (real or imagined) geographies but also to the centralization of theatre studies on distinct paradigms – the privileging of the avant-garde, the focus on cultural production within nation states, the rigidness of periodization etc.

Iceland is in the ‘middle’ when it comes to the northern hemisphere and the western world, circling around Europe and North America. At the same time, it’s situated in the middle of an ocean and was largely isolated from the rest of the world until last century. We therefore welcome you all to confer at an ideal place to discuss centre and decentralization of today’s world of performance and research.

- Theatre of the metropole

- The theatre of the streets

- The in between – the areas of neither

- The cultural capital of the mainstream and the marginal

- Performance on the edge

- Theatre on the margins of society

- The viewpoint of the outsider

- Performing questions of gender and marginality

- Culture of protests: Performance of dissensus

- Issues of the historical and contemporary mainstream

- Definitions of cultural importance and legitimacy

- The duality of High-brow and low-brow: Cultural relevance of entertainment

- The theatre maker as a central figure

When the middle is “nowhere”

- Decentring of social media and cyberformance

- Amateur performance and its (marginal) culture

- The ‘centre’ as a point of exchange

- The culture of cancellations

- Cultural experience of the lockdown

- A new world order without groups or the outside

*Reykjavik 2022 is proposed as an in-person conference, though of course we shall be monitoring the Covid situation in the coming months.

Abstract submissions open in November and will close 31st January 2022.

All abstract submissions are made through the Cambridge Core website.