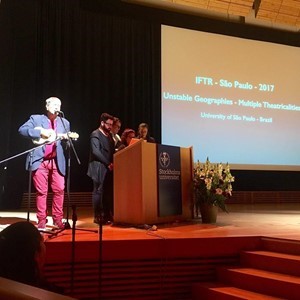 Unstable Geographies, Multiple Theatricalities
“Space must be considered as a totality, like the society itself that gives life to it (...) Space must be considered as a set of functions and forms that arise through processes of the past and present.”
Milton Santos
The 2017 conference theme, Unstable Geographies: Multiple Theatricalities,aims at the political and economic issues underlying the territorial and symbolic conflicts of a globalized world and, at the same time, targets the expansiveness of theatrical and performative fields that recognize and surprise each other. Massive migrations and the growing deterritorialization of human cultures have been accompanied by increasingly unstable artistic standards, concepts and institutional relations.
Brazil has historically welcomed forms of aesthetic representation from the Northern hemisphere and reprocessed them from a unique perspective that includes indigenous and African diasporic cultures. Contemporarily, the country presents itself as an exemplary locus for the multiple manifestations of an expanded and impermanent theatricality. Brazil was and is a complex mestiçagem of mingled races, ethnicities, nationalities and religions; it constitutes a malleable geographical phenomenon in which territories did not become distinct nations, as happened in other parts of Latin America. Instead, the country is made up of states and regions, with their cultures, accents and own vocations and individual identities founded mainly on differences.
The 2017 Conference site offers a space to consider the intense contemporary migratory flows and counterflows in which the peripheral regions of the globe radiate vitality to the Northern hemisphere and reverberate their traditions from a distinct point of view.
In this context, thinking about theatre and performance as open opportunities for action implies the search for more transformative relationships between art and society.
Subthemes

1 posts
Hadeel Abdelhameed
seems fantastic, when will be the submission and registration ?

1 posts
Elisabeth Lopes
Hello everyone, the registration and submission is scheduled for January 15, 2017. Still we do not divulge this, because we want to put all the information soon, but it is still missing some.
Welcome to São Paulo!
The organization

2 posts
Ravi Chaturvedi
What is the deadline for bursary applications?

1 posts
Krittika Mondal
What are the deadlines for the New Scholars and Helsinki Prizes?

1 posts
Arti Makarand Wadodkar
What is the deadline for submission of bursary applications?

1 posts
Hayato KOSUGE
Where can I have the information about CFP and its deadline? Japanese academic calender ends at the end of March, so I have to ask my university the travel fee next year before that.