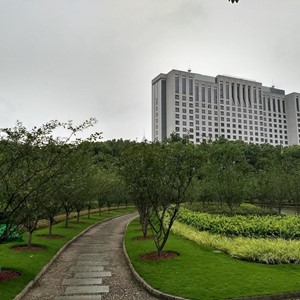 In July 2019 the Theatre & Architecture Working Group met during the IFTR Conference in Shanghai.

For this meeting we proposed the theme of ‘Performative Urbanism as Critical Spatial Practice’, a theme that responded in part to the main conference theme of ‘Theatre, Performance and Urbanism’. Exploring how the performative in architecture specifically concerns what the built environment actively does rather than what it describes, we posed the following two questions: How do the spatial arts – urban, architectural, interior, exhibition, installation and scenographic design – critically address the city as both myth and reality? How does performance itself speak to urban spatiality?

Fourteen proposals were accepted but only four contributors were able to attend the meeting in person: David DeGrow, Andrew Filmer, Alex Halligey, and Helen Stratford. Jane Rendell provided a film and we were joined – via Skype – by Tanja Beer, Zena Cumpston and Shauna Janssen. We also welcomed Julia Schmidt, a postgraduate student from Stockholm University, who joined us for the duration of the conference. Being a smaller group than usual enabled extended discussion of papers and presentations and an opportunity to try out practical methods for exploring the performativity of the city.

Our first presentation on the Monday of the conference was from Jane Rendell (Barlett School of Architecture, UCL). Unable to attend in person, Jane sent a film, embedded in a Powerpoint presentation. The overlaying of two times (via the film and its subsequent re-narration) created an emergent or hybrid diagram that was both temporal and spatial, and served to reinsert temporality into critical spatial practice. Following this, on the following day, Alex Halligey (University of Witwatersrand) screened a short film on Izithombe 2094, a participatory theatre and performance project she created with collaborators in the inner city Johannesburg suburb of Bertrams in 2015/16. In her accompanying presentation, Halligey proposed that theatre offers itself as a particularly allusive tool for knowing and experiencing cities critically. Helen Stratford (Sheffield University) followed, discussing participatory and pedagogical tactics that combine performative methodologies with critical representational and spatial practices. Helen’s presentation focused on her own practice research and teaching, including recent workshops she conducted at Raumlabor’s Floating University in Berlin.

On Wednesday Andrew Filmer (Aberystwyth University) discussed how the transdisciplinary work of the collective TAAT (‘Theatre as Architecture Architecture as Theatre’) is contributing to breaking down the binary between theatre and architecture through generating social and spatial encounters in urban space. Tanja Beer and Zena Cumpston (University of Melbourne) joined us on Skype to discuss The Living Pavilion, an Indigenous-led, collaborative and temporary outdoor event space on the University of Melbourne’s Parkville campus that combined First Nations knowledge systems with ecological science, sustainable design and participatory arts practice. Shauna Janssen (Concordia University) discussed her research into performative urbanism, approaching the term ‘performative urbanism’ not as a method or discipline, but rather as a lens or field of critical, spatial, material, social and iterative practices. On the Thursday of the conference our final presenter was David DeGrow (University of Toronto) who examined the implications of the 1983 renovation of Theatre Passe Muraille in Toronto, Canada, arguing that the architectural renovation of the theatre space had a significant effect on the artistic output of both an influential Canadian theatre company, and an important Toronto theatre space, for decades to come.

Finally, on Friday we travelled into the city to explore the performativity of People’s Park through observation, reflection and enactment, and to share methods for performative urban engagement and intervention.

The Theatre & Architecture Working Group wish to thank the organizers of the Shanghai IFTR Conference for all their efforst. We look forward to meeting again in Galway in July 2020.