CFP: Emerging from the Silence: Working-Class Women in Irish Theatre 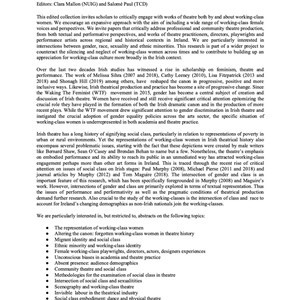 Proposals are welcome to an edited collection about the works of theatre both by and about working-class women.

Proposals are welcome to an edited collection under the title

Emerging from the Silence: Working-Class Women in Irish Theatre

This edited collection invites scholars to critically engage with works of theatre both by and about working-class women. We encourage an expansive approach with the aim of including a wide range of working-class female voices and perspectives. We invite papers that critically address professional and community theatre production, from both textual and performative perspectives, and works of theatre practitioners, directors, playwrights and performance artists across regional and historical contexts in Ireland. We are particularly interested in intersections between gender, race, sexuality and ethnic minorities. This research is part of a wider project to counteract the silencing and neglect of working-class women across times and to contribute to building up an appreciation for working-class culture more broadly in the Irish context.

Over the last two decades Irish studies has witnessed a rise in scholarship on feminism, theatre and performance. The work of Melissa Sihra (2007 and 2018), Cathy Leeney (2010), Lisa Fitzpatrick (2013 and 2018) and Shonagh Hill (2019) among others, have  reshaped the canon in progressive, positive and more inclusive ways. Likewise, Irish theatrical production and practice has become a site of progressive change. Since the Waking The Feminist (WTF)  movement in 2015, gender has become a central subject of creation and discussion of Irish theatre. Women have received and still receive significant critical attention epitomizing the crucial role they have played in the formation of both the Irish dramatic canon and in the production of more recent plays. While the WTF movement drew significant attention to gender discrimination in Irish theatre and instigated the crucial adoption of gender equality policies across the arts sector, the specific situation of working-class women is underrepresented in both academia and theatre practice.

Irish theatre has a long history of signifying social class, particularly in relation to representations of poverty in urban or rural environments. Yet the representations of working-class women in Irish theatrical history also encompass several problematic issues, starting with the fact that these depictions were created by male writers like Bernard Shaw, Sean O’Casey and Brendan Behan to name but a few. Nonetheless, the theatre’s emphasis on embodied performance and its ability to reach its public in an unmediated way has attracted working-class engagement perhaps more than other art forms in Ireland. This is traced through the recent rise of critical attention on issues of social class on Irish stages: Paul Murphy (2008), Michael Pierse (2011 and 2018) and journal articles by Murphy (2012) and Tom Maguire (2018). The intersection of gender and class is an important feature of this research, which has been specifically foregrounded in Murphy (2008) and Maguire’s work. However, intersections of gender and class are primarily explored in terms of textual representation. Thus the issues of performance and performativity as well as the pragmatic conditions of theatrical production demand further research. Also crucial to the study of the working-classes is the intersection of class and  race to account for Ireland’s changing demographics as non-Irish nationals join the working-classes.

We are particularly interested in, but restricted to, abstracts on the following topics:

Maguire, Tom. ‘The State We’re In: Violence and Working-Class Women on and off the Contemporary Stage’. Journal of Contemporary Drama in English, De Gruyter. Vol.6 Issue 1. (2018) pp.161-175.