Mad, Bad and Dangerous: a celebration of 'difficult' women 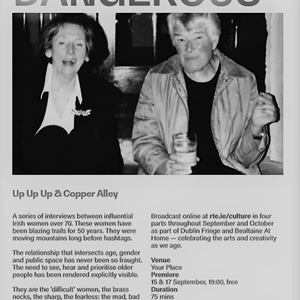 Mad, Bad and Dangerous: a celebration of ‘difficult’ women is a series of recorded conversations between Irish women in the public eye who are over 70 years of age which will premiere online September

Of the women featured in the 4-episode series some are artists, writers, film-makers, some are political leaders and cultural change-makers, some are human rights and environmental activists, sociologists, anthropologists, one has been shot and some have been jailed. The first episode features Bernadette McAliskey (Devlin) and Lelia Doolan in public conversation for the first time since the premiere of Doolan’s 2011 award-winning film Bernadette: Notes On a Political Journey.

Episodes 1 and 2 are available to watch for another week online: https://www.fringefest.com/festival/whats-on/mad-bad-dangerous-a-celebration-of-difficult-women

It will be broadcast online at rte.ie/culture in four parts throughout September and October as part of Dublin Fringe Festival 2020: Pilot Light Edition and Age and Opportunity’s Bealtaine At Home — celebrating the arts and creativity as we age.