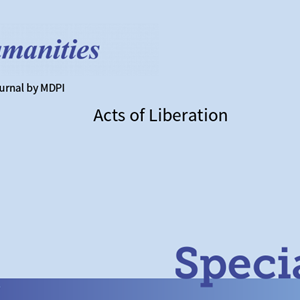 Reminder: Abstracts of 300 words and a short bio are due by 31st of October. Abstract Submission: Please email: r.t.hazou@massey.ac.nz

Reminder: Abstracts of 300 words and a short bio are due by 31st of October.

Please Note: This Open Access journal is free for readers, with an article processing charges (APC) paid by authors or their institutions. Given the impact of COVID and the lack of financial support for many scholars, the journal has confirmed it will be offering 90% discount on this fee for authors who submit to this special issue.

On the 15th of June in Albuquerque, New Mexico, protestors attempted to pull down a statue of the Spanish conquistador Juan de Oñate. Oñate is controversial figure who is celebrated as the founding father of the Spanish colony in New Mexico despite being convicted by the Spanish crown for crimes against the Native American inhabitants of the Acoma Pueblo. During the demonstration to tear down the statue, an activist shouted ‘This is an act of decolonisation! This is an act of liberation!’ (Mars and Alcorn, 2020). Similar ‘acts of liberation’ have been staged around the globe in the wake of the murder of George Floyd in Minneapolis and the resurgence of the Black Lives Matter protests, with demonstrators tearing down monuments, contesting narratives of shared history, and challenging perceived white and Eurocentric commemorative practices. Taking inspiration from the urgent cry of a black lives matter activist, this is a call for papers that engages with recent ideas, theory, and practices of liberation.

The Black Lives Matter movement has been accompanied by a renewed interest in Black feminist thinkers such as Angela Davis (2003) and bell hooks (1981), black scholars such as W.E.B. Du Bois, writers such as James Baldwin (1963), and the philosophy of self-determination as expressed in Stokely and Hamilton’s Black Power: The Politics of Liberation in America (1967).

The current political upheavals draw attention to the need to explore with renewed critical vigour decolonial approaches to practice, theory, and teaching. Decoloniality proposes that the "coloniality of power" (Quijano, 2000) did not end with colonialism, and that the modern capitalist world-system imposes a racial/ethnic classification of people as a basis for global exploitative and extractive power-structures. According to Walter Mignolo, decoloniality involves “delinking” from Eurocentric categories of thought to “change the terms and not just the content of the conversation” (2007, 459). For Nelson Maldonado-Torres, decoloniality involves the production of “counter-discourses, counter-knowledges, counter-creative acts” aimed at breaking down “hierarchies of difference that dehumanise subjects and communities and that destroy nature” (2016,10).

This Special Issue of the Humanities journal will consider the emancipatory role of culture and the role of the arts in humanising subjects and communities impacted by colonial hierarchies of difference. This call for papers invites submissions from decolonial and indigenous scholars, practitioners, and activists involved in the production of counter-knowledges and counter-creative acts that challenge the privileging of Western- and European-centric ways of being and knowing. We hope that authors will engage with conceptions of liberation as explored through the arts and cultural production in general and in the fields of theatre and performance specifically. Contributions are invited that consider the embodied and performative aspects of liberation and how liberation acts, is acted on, or is acted out.

Fanon, Frantz. 1967. The Wretched of the Earth. Trans. by Constance Farrington, Harmondsworth: Penguin.

Notifications of acceptance will be sent by 30 November 2020. Full manuscripts are due 31 March 2021.

Humanities is an international peer-reviewed open access quarterly journal published by MDPI. Humanities is an international, peer-reviewed, and open access scholarly journal (free for readers). The central concern of this journal pertains to the core values of the Humanities, i.e., focusing on the ideals of human existence, seen through many different lenses. Humanities is a member of the Committee on Publication Ethics (COPE), and, accordingly, submissions are peer reviewed rigorously to ensure that they conform to the highest standards in their field. Key benefits from publishing with the journal include:

§  Open Access: This journal is free for readers, with article processing charges (APC) paid by authors or their institutions. This ensures the dissemination of new knowledge to various communities of concern. A special article processing charge (APC) of 100 CHF (Swiss Francs), approximately $169 NZD or $110 USD applies to papers accepted after peer review.

§  Rapid Publication: Manuscripts are peer-reviewed and a first decision provided to authors approximately 21 days after submission; acceptance to publication is undertaken in around 6 days. This quick turnaround means that current research can be published that speaks directly and urgently to pressing issues.

§  High Visibility: Indexed in ERIH Plus.

Manuscripts should be submitted online at www.mdpi.com by registering and logging in to this website. Manuscripts can be submitted until the deadline. Accepted papers will be published continuously in the journal (as soon as accepted) and will be listed together on the special issue website. Submitted manuscripts should not have been published previously, nor be under consideration for publication elsewhere (except conference proceedings papers). All manuscripts are thoroughly refereed through a double-blind peer-review process. Please visit the Instructions for Authors page before submitting a manuscript. Submitted papers should be well formatted and use good English. Authors may use MDPI's English editing service prior to publication or during author revisions.