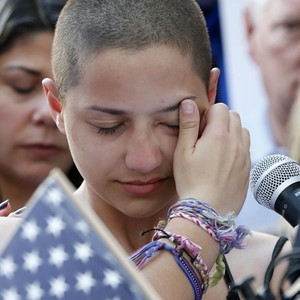 In the spring of 2019, Daniel Fish’s revival of Oklahoma! became the first play of the commercial theatre to join the Hollywood Gun Neutral initiative, pledging that, for every gun appearing onstage, the producers would donate money to organizations “committed to helping solve the gun violence crisis by destroying firearms that should be out of circulation.” A founding member of the production company, Level Forward, stated: “While artists must be free to honestly portray the world in which we live, that privilege comes with a great responsibility to do our part in advancing gun safety.”

Level Forward’s statement points to the relationship between art and society, and particularly, the impact of representation on culture. While film and theatre artists hope to offset the glorification of gun violence with political action, gun violence has become synonymous with the American identity here in the U.S. and abroad. One third of people in the U.S. own guns, and both the pandemic and the protests saw marked increases in gun sales. The U.S. has the highest rate of gun ownership and gun deaths of any nation in the world. The Second Amendment has become an all-important electoral issue while there is now widespread recognition that it has its roots in the history of slavery and continues to result in systemic racial violence.

The rate of police shootings of people of color is five times the rate of police shootings of white people. The protests over the murders of George Floyd and Breonna Taylor poured over into every city in the U.S. and cities around the world. In response, police and federal troops shot at protesters with tear gas and rubber bullets, most notoriously in Washington, D.C. to clear the way for Trump’s photo shoot. That contrast reveals an ongoing tension between actual shooting and the various media platforms that show them to the larger world, or, to reiterate, between violent events and their representations.

Such a dialectic continues to shape American politics in particular. The Democratic and Republican national conventions have both featured guns in dueling political narratives. Each featured a parent of a murdered Stoneman Douglas High School student. The Democratic convention highlighted the protests, the fight for racial justice, and the need for gun control. The Republican convention, by contrast, celebrated gun ownership and the stressed the importance of protecting the Second Amendment.

The 2021 December special issue focuses on “shooting,” broadly construed. While guns are inextricably bound to the history and identity of the United States, the act of shooting (via duels or gun shows) constitutes a performance of its own throughout the world. Put otherwise, shooting is a vexing performance that exposes the contradictions inherent in social and political organization, as revealed so well in Suzan-Lori Parks’s The America Play. Essays may cover a range of topics, including, but not limited to the protest gesture of “Hands Up, Don’t Shoot!” Black Panther Police Patrols and the protest of the Mulford Bill, police shootings in The Red Line and the opera Blue, duels in Hamilton and Eugene Onegin and duels in general, wild west pageants and gun shows, portrayals of marksmen such as Nat Love and Bass Reed, virtual reality patrols as treatment for trauma in veterans, and the proliferation of shooting in video games. What narratives are constructed of shooting in its varied contexts? What is at stake, physically and psychically, for the protagonists and also those rendered object in scenes that involve shooting? What ideologies are reified and what ideologies are challenged by portrayals of gun violence?

This special issue will be edited by E.J. Westlake. We will consider full-length essays for the print edition (6,000-9,000 words). For information about submission, visit our website:

Print submissions should submitted no later than 1 February 2021.

Submissions should be uploaded through our ScholarOne portal:

Feel free to contact the editor with questions or inquiries: ej.westlake.theatrejournal@gmail.com