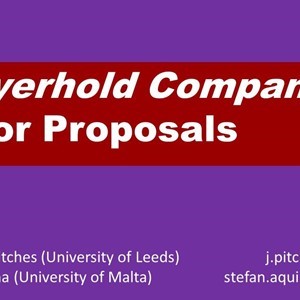 Prof. Jonathan Pitches (University of Leeds) and Dr Stefan Aquilina (University of Malta) are delighted to invite proposals for a planned companion volume to the work, interpretation, and heritage of Vsevolod Meyerhold (1874-1940). The volume has already been discussed with Ben Piggott of Routledge who has expressed a strong interest in the project.

The volume seeks to determine the current state of Meyerhold studies and practice. While past scholarship has done much to place Meyerhold’s name as a hallmark of modernism, there still remains a plethora of material waiting to be discovered and analysed. With this in mind, and even at this early stage, the volume is promising a marked expansion of our knowledge of Meyerhold as it is seen today. It will be structured in four parts. Part 1 (Histories and Contexts) will enhance understanding of Meyerhold’s many histories, expanding beyond conventional subjects like the grotesque and biomechanics, to contexts which have been overlooked within scholarship on Meyerhold (his work in the provinces for instance, and with female collaborators). Part 2 (Sources) will equally engage with previously untapped material in Meyerhold’s oeuvre, this time by reproducing and contextualising previously untranslated primary and secondary sources on his work. Part 3 (International Transmission) will radically extend geographical understandings of Meyerhold’s practice by mapping routes of migration across continents, with planned contributions including entries on South Asia and the Middle East. Part 4 (Applications) will look into ways in which Meyerhold’s work is being applied in a number of contemporary scenarios, in health, in education and/or technology, for example. Practice Research investigations are particularly encouraged for this Part.

The editors are therefore particularly interested in an expansion of these themes through topics that include but are not limited to the following:

·         Meyerhold and his overlooked contemporaries;

Prospective contributors are invited to join the core group of writers and scholars who have already expressed interest in submitting an essay to the project. These are:

Abstracts of about 300 words should reach the two editors on j.pitches@leeds.ac.uk and stefan.aquilina@um.edu.mt by not later than 1 March 2020. Kindly include a short bionote. A full book proposal will be submitted in May to Routledge, while a tentative deadline for writers to submit the essays is July 2021.