Call for Papers: At Odds. Models of Identity in Contemporary Puppet Theatre 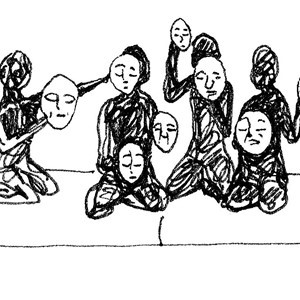 Protagonists of contemporary puppet theatre can assume multiple forms – bare hands, glove puppets, marionettes, shadow puppets, everyday objects or moving mouth puppets that are manipulated or animated by players. In contrast to conventional acting, puppet theatre has never been burdened with questions concerning the corporeal and psychological unity of the player and his/her dramatic role. However, puppet theatre has only recently begun to make use of this division – a development attested to by the sudden proliferation of puppet designs, manipulation modes and dramaturgical techniques over the last four decades. The division between player and role, arguably the fulcrum of contemporary puppet theatre practice, has proven invaluable as a mainspring of innovation in both artistic expression and intellectual reflexivity.

In Bunraku-style forms of puppet theatre, the human body acts merely as a corps-castelet, as a living booth upon which puppets and objects perform, and is thereby effectively ousted from the centre of specular attention it habitually occupies. The body is relegated to the position of just a scenic element among many, all of which constitute a network of animate and material actors whose individual agency unfolds only in their interdependent relation to one another. Puppet theatre figuratively disassembles and rearranges bodies in kaleidoscopic fashion as it remodels objects into physical extensions of the players: Staging a dialogue between a puppet-bearing hand and a knee fashioned into a face poses no problem in the realm of puppet theatre.

The extension, duplication, superimposition or hybridisation of the human body also implies its fragmentation into dissociated characters, which in turn challenges the idea of a stable and unitary identity and undermines normative concepts of a holistic body and their underlying discourses. Puppet theatre acts as a laboratory for alternative models of identity in a variety of ways. In its combination of different modes of interaction and miscellaneous scenic tools, puppet theatre constitutes a type of experimental design which inquires into how human and non-human identities are perceived, generated and changed through techniques and processes of play.

Such inquiries take on various forms, e. g. via the production of fragmented bodies (principally in the works of Ilka Schönbein and Mossoux-Bonté), the use of manipulation techniques derived from object theatre (particularly in the work of Agencia El Solar, a ‘detective agency for objects’ which reconstructs the biographies of everyday objects), the splicing of human bodies and puppets (notably in Invisible Landsby Livsmedlet Theatre, a production which investigates issues of refugeeism), or by employing mixed materials to explore figurative strategies of identity generation, transformation and con-/destruction (especially in Waxby TJP Strasbourg or 3 Akte by Antje Töpfer).

The manner in which puppet, object and material theatre deconstructs anthropocentric, holistic concepts of identity through specific techniques and aesthetics may in turn prove productive for contemporary theorisations of theatre and acting.

We welcome different approaches and perspectives and therefore encourage proposals for papers from all disciplinary backgrounds. We are particularly interested in contributions that engage with contemporary puppet theatre from the vantage point of

1.     Concepts of Identity: In what way does the fragmentation and precarious reassemblage of bodies in puppet theatre engender new concepts of identity and/or generate trans-identities?

2.     Concepts of the Body: How are concepts of the body made visible, commented on or challenged by such figurative processes as the duplication, cross-contamination or hybridisation of human and non-human, animate and inanimate bodies?

4.     Agency: How does puppet theatre make manifest the agency of objects, thereby constituting an appropriate space to reflect on complex global actor-network entanglements?

The conference At Odds. Models of Identity in Puppet Theatre will take place at the University of Bern and Bern University of the Arts on the 23rdand 24thof January 2020.

Please send an abstract (300 words) as well as a brief bio and list of publications to: figurentheater@itw.unibe.ch

Applicants will receive notification of acceptance by end of July 2019.

Abstracts may be written in English, German or French.

Conference papers may also be held in these languages.

We endeavour to support guest speakers with financial contributions towards covering their travel expenses and accommodation costs. Conference fees will be waived for guest speakers.